Elephants had never been part of Lawrence Anthony’s plan for Thula Thula, but in 1999 he was telephoned by a conservation organisation which asked whether he would be willing to take on a herd of nine animals which had escaped from every enclosure they had ever been in, wreaking havoc across KwaZulu-Natal, and were considered highly dangerous. Realising that the Elephants would be shot if he declined, Anthony agreed to give them a home.

But he was the herd’s last chance of survival – notorious escape artists, they would all be killed if Lawrence wouldn’t take them. He agreed, but before arrangements for the move could be completed the animals broke out again and the matriarch and her baby were shot. The remaining Elephants were traumatised and very angry. As soon as they arrived at Thula Thula they started planning their escape.

“They were a difficult bunch, no question about it,” he recalled. “Delinquents every one. But I could see a lot of good in them too. They’d had a tough time and were all scared, and yet they were looking after one another, trying to protect one another.”

Lawrence decided to treat the Elephants as errant children, working to persuade them, through words and gestures, that they should not behave badly and that they could trust him. He concentrated his attention on Nana, the matriarch of the herd: “I’d go down to the fence and I’d plead with Nana not to break it down,” he said. “I knew she didn’t understand English, but I hoped she’d understand by the tone of my voice and my body language what I was saying. And one morning, instead of trying to break the fence down, she just stood there. Then she put her trunk through the fence towards me. I knew she wanted to touch me. That was a turning point.” Soon they were allowed out into the reserve.

As Lawrence battled to create a bond with the Elephants and save them from execution, he came to realise that they had a lot to teach him about love, loyalty and freedom. Set against the background of life on the reserve, with unforgettable characters and exotic wildlife, he wrote The Elephant Whisperer, a book that appealed to animal lovers worldwide.

After his death, Lawrence’s beloved Elephants came to his house to say goodbye.

When Lawrence died at the age of 61 in 2012, two herds of wild South African Elephants slowly made their way through the Zululand bush until they reached the house of late author, the conservationist who saved their lives. The formerly violent, rogue Elephants, destined to be shot a few years ago as pests, were rescued and rehabilitated by Anthony, who had grown up in the bush and was known as the “Elephant Whisperer.” For two days the herds loitered at Lawrence’s rural compound on the vast Thula Thula game reserve in the South African KwaZulu — to say good-bye to the man they loved. But how did they know he had died? Known for his unique ability to calm traumatized Elephants Lawrence had become a legend. He is the author of three books, Babylon Ark, detailing his efforts to rescue the animals at Baghdad Zoo during the Iraqi war, the forthcoming The Last Rhinos, and his bestselling The Elephant Whisperer. There are two Elephant herds at Thula Thula. According to his son Dylan, both arrived at the Anthony family compound shortly after Anthony’s death. “They had not visited the house for a year and a half and it must have taken them about 12 hours to make the journey,” Dylan is quoted in various local news accounts. “The first herd arrived on Sunday and the second herd, a day later. They all hung around for about two days before making their way back into the bush. “Elephants have long been known to mourn their dead. In India, baby Elephants often are raised with a boy who will be their lifelong “mahout.” The pair develop legendary bonds and it is not uncommon for one to waste away without a will to live after the death of the other.

What Is The Thula Thula Land Expansion Project For Elephant Habitat?

The original herd of 7 Elephants that Lawrence Anthony rescued in 1999 has now increased to 30 Elephants meaning the maximum sustainable capacity of Thula Thula has been reached!

How Can The Long-Term Future Of The Elephant Whispered Herd Be Secured?

Thanks to the local community, Thula Thula has the opportunity to add a further 3500 hectares of land to increase their habitat. This solution requires 35 km of electric fencing as well as roads, increased security, guard training, security equipment and vehicles, conservation, land management and the list just go on, to keep the wildlife safe. Community projects such as this, not only support the wildlife but also improve local employment and education.

For my part, I am doing a 10,000 feet skydive to help raise funds for this project.

By donating to this cause you are helping to secure the future for the Thula Thula Elephants and local communities. 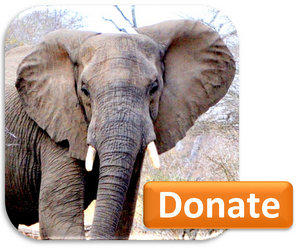 To help secure the long-term future of the Thula Thula Elephants please DONATE at https://t.co/bdiEDD7ljr

Thank you for your support, Paul.

Please SHARE to raise awareness to this important project for Elephants. You can also SUBSCRIBE for news and update straight to your inbox.

"The Greatness Of A Nation And Its Moral Progress Can Be Judged By The Way Its Animals Are Treated" - Mahatma Gandhi I am a wildlife advocate and I am 100% dedicated to raising awareness about wildlife crime and its effect on the environment. Whether it be doing everything to stop poaching, calling for animal free circuses or ending the cruel treatment and exploitation of animals I will do everything I can to highlight it. I am the proud foster parent of orphan Elephants Lentili at TheDavid Sheldrick Wildlife Trust and Kavala at Elephantopia. I am a proud trustee of the Lion conservation charity LionAid. View all posts by ProtectAllWildlifeBlog