One of South Africa’s top anti-Rhino poaching cops has been fired on allegedly “trumped-up charges” and is now unemployed and looking for a job.

“It is appalling … the whole thing is a circus,” Warrant Officer JP van Zyl-Roux’s attorney Jacques Botha told The Witness.

After 29 years in the police force, the latter 10 years in the Endangered Species Investigation Section of the Hawks, most of it as a “team leader” working undercover in game reserves in KwaZulu-Natal, Van Zyl-Roux will pack up his office on Monday.

He declined to comment on Sunday, but a colleague said: “He is devastated. He cannot believe this has happened to him after all his hard work and dedication. He knows that in a perfect world he would never have been convicted on this rubbish.”

Van Zyl-Roux and his team have been responsible for nabbing more than 70 Rhino poachers — including alleged poaching kingpin Dumisani Gwala — for which they have received local and international recognition.

He was pulled from the beat two years ago, and since then Rhino poaching in the province has spiked from 116 that year to 162 last year, and this year, to date, 205.

At that time he was told he was under investigation for alleged shooting of poachers.

In a previous interview, Botha said the poachers were all shot by members of the Special Task Force “while armed, resisting arrest and shooting back and in circumstances where they were caught red-handed in game reserves”.

“There was no case … my client did not shoot anyone dead.

“He once shot a gun out of the hand of one poacher and arrested the suspect,” Botha said.

“The matter went nowhere and it appears there was a decision not to prosecute.”

Botha said he believed the matter was “rooted in the shooting of a poacher purportedly linked to a very high-ranking ANC politician”.

In March this year Van Zyl-Roux was served with a notice to appear before a disciplinary inquiry relating to allegations he had failed to hand over a docket to Anti Corruption Unit investigators, that private firearms were found in his office and that through his conduct he had put the SAPS into “disrepute and embarrassment”.

In spite of getting permission to represent his client at the hearing, Botha was kicked out after he read a plea statement in which he claimed the charges arose out of an “ulterior motive on the part of certain elements with the ranks of employer [SAPS] of which the ultimate aim is to either terminate or curtail my success with respect to anti-poaching and related corruption activities”.

The hearing chairperson ruled that the charges were not serious and thus Van Zyl-Roux was not entitled to private attorney representation.

Botha said: “My client’s allegations regarding a conspiracy were now substantiated, it was now so obvious. I placed it on record that I had obviously become a thorn in their sides, the conviction and dismissal of my client was now a foregone conclusion, they were a thinly-disguised tag-team to convict my client and evict him from the SAPS.”

In June this year, Van Zyl-Roux was convicted of all but the failure to hand over the docket charge and dismissed.

“They gave us no reasons. We did an internal appeal [to the head office] pointing out all the irregularities and abuses, including bias and collusion between the presiding officer and the prosecutor. But on Monday they informed him that his appeal had failed. Again they gave no proper reasons,” Botha said.

Van Zyl-Roux intends taking his dismissal on appeal to the public service bargaining council and, if he loses there, to the labour court. This could take years.

Hawks spokesperson Brigadier Hangwani Malaudzi said the matter had been finalised and “the due processes followed”.

JP van Zyl-Roux has the support of Saving The Wild — an internationally-funded organisation seeking to protect South Africa’s wildlife.

Director Jamie Joseph said: “Tragically, in South Africa, the good cops, the best of the best, are often targeted for doing their job ‘too well’.

“In the process of going after the worst of the worst who have political protection, dedicated police officers are either chained to their desks, or dismissed on a barrage of unfounded charges in a witch-hunt.”

She said van Zyl-Roux was a “hero” and Saving the Wild’s legal team would stand by him.

“He does not need to clear his name … his impeccable record speaks for itself. This is a battle against corruption and we will illustrate to the world what is really going on in South Africa’s ‘war on poaching’,” she said.

She said recently the main prosecutor on the Gwala matter, who has appeared in court dozens of times, had been removed from the case on the day he was to make an application for the recusal of the magistrate.

“And now the investigating officer has been effectively removed. How convenient?”

While JP Van Zyl-Roux deals with the hand he has been dealt and navigates these accusations, our friends Jamie Joseph (SavingTheWild.org) and Elephant Action League have joined forces to back him and bolster this hand. They will share with us ALL that transpires so we can share it with you, while they fight to clear his name. We’ll bring you more on this as it unravels of course, meanwhile, our collective thoughts are with JP Van Zyl-Roux and his family – he must feel very alone right now. 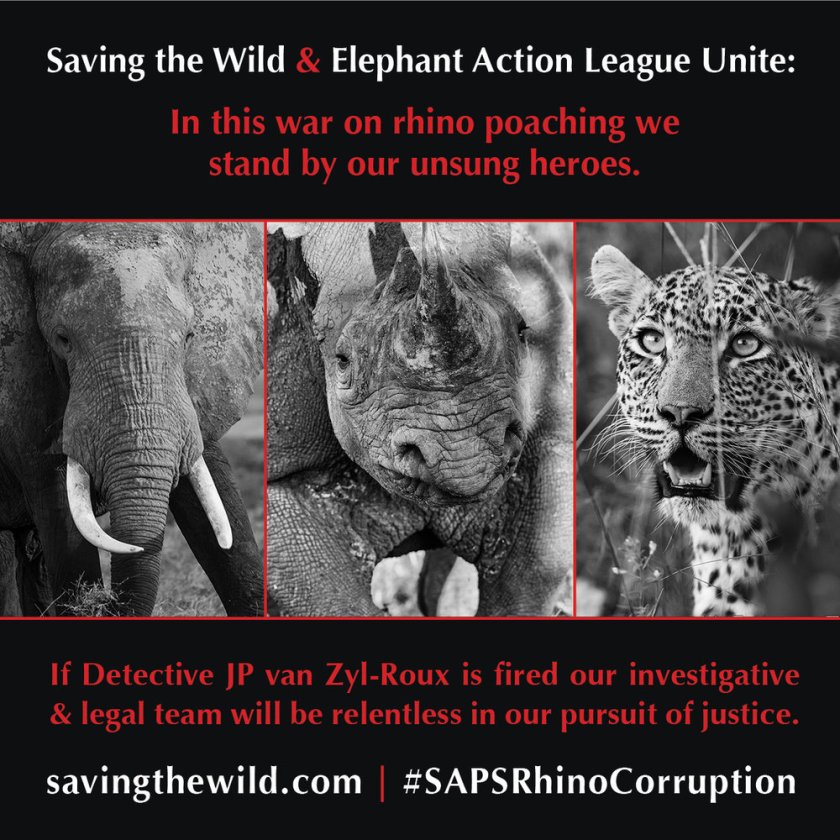