The canned Lion hunting industry is a major concern globally and the National Council of SPCAs (NSPCA) and Blood Lions have released a new short film to create awareness about the welfare of captive bred Lions and other predators in South Africa.

In the 3-minute long footage, NSPCA and Blood Lions condemn the growing trend of captive Lions facilities that exploit Lions for their monetary gain.

The award-winning documentary and campaign gave canned hunting, predator breeding and cub petting global exposure in a number of awareness films, while the NSPCA has dedicated a Wildlife Unit to check and monitor these predator farms regularly.

“The biggest problem in South Africa is that we are now starting to farm wild animals,” says NSPCA Wildlife Unit spokesperson, Ainsley Hay. “Some people think that the number is 160 land farms but we actually think that there is a lot more. They may say that they are a zoo or a captive display facility, they [are] also breeding predators on the side lines.”

While the industry is growing at an alarming rate, not only is it extremely popular in South Africa but this trade comes at a huge price – with a lack of welfare and inhumane treatment of the Lions as a result.

“Animal welfare considerations are regarded as a pillar of any civilised society,” says Ian Michler of Blood Lions. 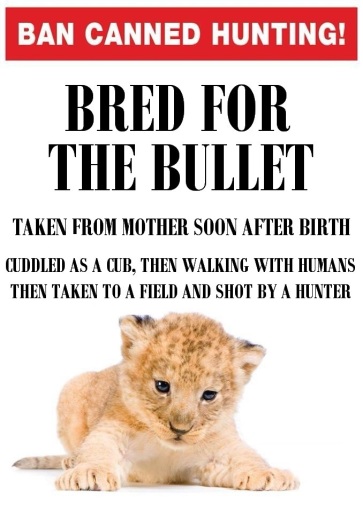 “In South Africa, we have a predator breeding industry that has far too many operators paying scant regard to this pillar, a situation that undermines our moral compass. Blood Lions supports those that bring awareness to all aspects of animal welfare. And when the breeding stops, welfare will no longer be a concern.”

This unethical activity – breeding and raising Lions in captivity- denies them of their basic needs; freedom and being wild.

Blood Lions says this comes with excessive welfare concerns from birth until death. Newly born cubs are removed from their mothers after only a few days and hand reared, often with inappropriate formulas which lack nutrition.

Taking the cubs away from their mothers causes a great deal of unnecessary stress to both the cub and the mother.

According to Blood Lions, these small wild animals are then excessively and constantly handled by people. Not only is this unnatural and distressing but exposes them to zoonotic diseases.

Added to this, when these cubs grow and are no longer useful for petting or ‘walking-with’ experiences, they end up in zoos, used for breeding, trophy hunting or are euthanised for the Lions bone trade for medicinal purposes.

These magnificent animals become slaves to the cage and victims to a disturbing industry. They spend their entire lives in confinement and contrary to popular belief, they do not add to conservation efforts.

“A common misconception given by the industry is that these Lions will benefit conservation – this is not true,” says National Inspector Arno De Klerk of the NSPCA Wildlife Protection Unit.

“These Lions are not ever rehabilitated, cannot be ‘re-wilded’ and will not be released back into the wild – they will continue to live confined to a cage for their entire lives, prisoners to a trade that exploits these animals.”

The NSPCA urges the public to stop supporting this industry.

“As long as there is a demand there will be a supply, help us end the suffering of these lions,” NSPCA adds.