The Cruel and illegal industry has killed nearly 150,000 of the planet’s largest land mammal in the last five years – fuelled by the demand from China

The ivory ­smuggler bragged about this cruel and ­illegal trade that now sees an Elephant slaughtered every 15 minutes.

Casually smoking a cigarette, the gangster reeled off a list of prices for tusks. He was totally ­unconcerned that he and his evil kind are driving the beautiful creatures to the brink of extinction.

For shortages push up the price of any commodity. And the value of of African ivory has soared by 20 per cent as supplies dwindle.

Conservationists are struggling to save the Elephants but fear they are fighting a losing battle with poaching gangs, who shoot the animals, hack off their tusks and leave the carcasses to rot.

The population has slumped from 1.3 million in 1979 to just 400,000 today. In the past five years alone, 150,000 of the huge beasts have been killed. The ivory trade middleman who spoke to ­undercover investigators in the Vietnamese village of Nhi Khe could not care less.

“We’ve been doing this a long time. There’s nothing to worry about.

“As soon as we receive full payment, we will deliver to your home.

“If you find something wrong about the product, you can get a full refund.

“We’re not going to cheat you. Normally there aren’t any problems. But there are ­always risks. After all it’s illegal. So we have to do it secretly.”

In reality, corruption among officials means ivory tusks and ornaments are openly traded on the streets of the village 12 miles outside the capital Hanoi.

When the smugglers cross into China they have to bribe border guards. A professional ivory trader admitted: “If you cannot pay them off it is a problem.”

But with the price of a single tusk fetching between £160,000 and £241,000, it is easy to see why there are an estimated 400 ivory workshops in Beijing. This is the stark reality behind the booming trade revealed in the Netflix documentary The Ivory Game.

DiCaprio’s team also follows activists and police in Africa as they play a desperate game of cat and mouse with poachers.

All too often they too late to save elephants from being slaughtered by locals, who are paid just a few pounds for the tusks.

One elderly poacher caught with a tusk in Kenya revealed he would get £5.60 for it.

But the men who sell the ivory on can make £2,400 a tusk – and they are the real quarry of an anti-poaching squad led by Elisifa Ngowi.

The film shows them at work in Tanzania. They are hunting notorious poacher Boniface Matthew Mariango – known as Shetani (The Devil).

Mr Ngowi, who was the Counter Terrorism chief in Tanzania before leading his anti-poaching force, said: “He is the number one target. He is responsible for 10,000 Elephant deaths.”

But he admitted his chances of snaring Shetani are not good as he does not even have a photograph of him.

And it is dangerous work. The poachers carry AK47 rifles and they are prepared to use them. Mr Ngowi said: “It’s him or us.”

Every poacher and smuggler caught is a small victory.

On the day DiCaprio’s film was released this week, the woman known as the Ivory Queen was facing charges in Dar es Salaam.

Yang Fenglan, a 66-year-old Chinese, is accused of leading one of Africa’s biggest ivory smuggling rings.

She is said to have been responsible for more than 700 tusks, worth £1.7million, illegally leaving Tanzania.

But activists say the only way to stop the wicked trade and save the Elephants is to end the huge demand for tusks in China. 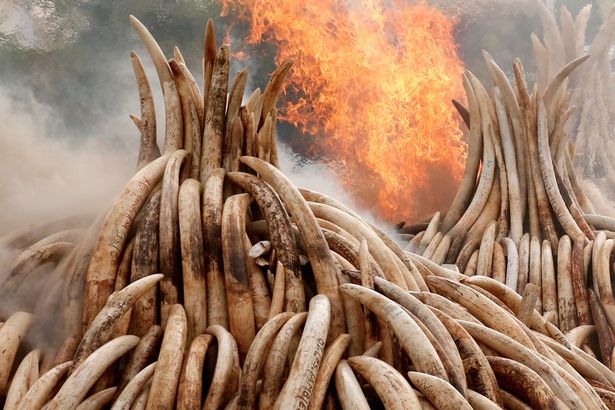 Kenyan Craig Millar, head of security at the Big Life Foundation, summed up the twisted logic of the traders. He said: “Traders in ivory actually want the extinction of elephants.

Ian Craig, who was awarded an OBE in June for decades of conservation work in Kenya, said: “We are at a watershed.

“Helicopters and guns and anti-poaching squads can’t win this war. There’s simply not enough men to cover the ground. We need a political solution.

“Are we going to allow the biggest land animal to disappear? The world wants elephants.”

Mr Craig, a friend of Prince William, was one of the driving forces that led to 105 tons of confiscated ivory being destroyed in a huge bonfire in Kenya in April. That was to stop corrupt officials stealing it and selling it on the black market. But even that was a drop in the ocean. For Africa still has hundreds of tons of illegal and sought-after tusks stockpiled.

Mr Craig added: “This isn’t Africa’s problem. It’s an international problem. Its too big and complex for individuals.”

Conservationist Andrea Crosta, who founded Wildleaks to fight for the elephants, said: “The reason they are slaughtered is the market in China. Hundreds of tons of ivory go into China every year.

“It’s big business. You don’t go to the police. You could risk your life.”

A thousand wildlife rangers have been killed in Africa over the last decade while trying to foil poachers like Shetani and traders like the Ivory Queen.

The evidence gathered by ­investigators working with Wildleaks persuaded the Hong Kong government to agree to outlaw the trade in ivory within the next five years.

But China has yet to agree to do the same – which horrifies Mr Crosta.

“One person holds in his hands the fate of elephants – the president of China.

“I think this is the first time in history that one person has in his hands the destiny of an entire species.”

The film’s directors Richard Ladkani and Kief Davidson hope it will will persuade governments to put pressure on the Chinese to outlaw the trade.

Mr Ladkani told The Sunday People: “We are presenting evidence that is undeniable.

“All the things activists are doing on the ground deter and disrupt the killings – but it’s not enough.

“This trade is driven by greed. There is so much money in it.

“We need to see Kenya’s burning of a stockpile repeated around the world. People shouldn’t have ivory in their homes. The only place for ivory is on a living elephant.

“We got great influencers like Leonardo DiCaprio on our side to get as many people behind due as possible so they will join the fight to stop this evil trade.”