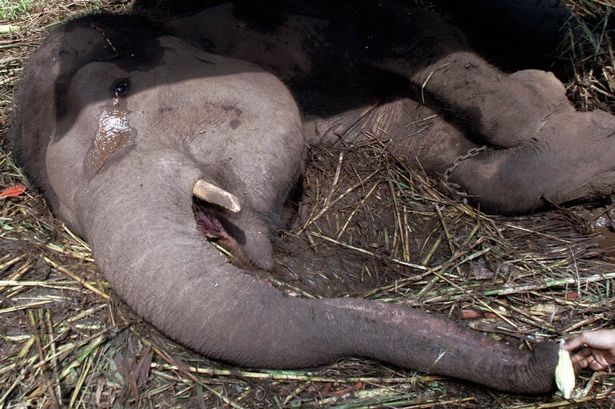 This is the heart wrenching moment an Elephant appeared to shed tears as it died in squalor at one of Indonesia’s so-called ‘death zoos’.

Laying on the floor with chains wrapped around her feet, Yani, a 34-year-old Sumatran Elephant mysteriously died at the Bandung Zoo in West Java on Wednesday afternoon (11/05). Yani had lain prone on the ground for more than a week and was found dead with bruises on its body. Zookeepers had moved the female Sumatran Elephant from the dirty, rusting cage where she spent most of her days after she fell ill last week.

But despite efforts to save the animal, Yani, appearing jaded with large sores covering her body, lost her fight for life – and these pictures show her final tearful moments.

Without a resident vet for almost a year, the Elephant didn’t stand much of a chance of surviving the illness.

An investigation has been launched but the cause of death is not yet known.

Keepers at the zoo insisted they did all they could, providing the animal with medicine and consulting vets.

But animal rights activists have slammed the zoo, dubbed online the most depressing zoo ever, with many claiming the animal enclosures are poorly maintained, filthy and cramped.

Bandung mayor Ridwan Kamil visited the sick Elephant before it died as anger mounted about the case. He said: “If they don’t have the budget to manage (the zoo), they should seek support.”

More than 10,000 people have signed a petition calling for the zoo to be cleaned up.

The rules that govern Indonesian zoos are not clear enough, Femke den Haas, of the Jakarta Animal Aid Network said.

She said: “Yani’s case is really just the tip of the iceberg because many animals are dying in Indonesian zoos.”

The WWF estimates there are between 2,400 to 2,800 Sumatran Elephants left in the wild, with poaching and loss of their rainforest habitat blamed for population decline.

They are classified as critically endangered by the International Union for Conservation of Nature.

The zoo has now been temporarily closed as officials began an investigation into the mysterious death.

The agency will conduct an investigation and perform an autopsy on the Elephant while the zoo is temporarily closed, she said.

“If they [the zoo management] reported the case to us earlier, we would’ve sent in our veterinarians. This is a clear case of neglect,” Sylviana said.

Bandung Zoo spokesman Sudaryo defended the zoo, saying that its own veterinarian had resigned last year and that they have not been able to find a replacement with experience in handling wild animals.

Yani, who was born and raised at the Way Kambas National Park in Lampung, was relocated to Bandung Zoo when she was 12 years old. Later, the Sumatran Elephant gave birth to a baby Elephant named Yamon in the zoo.

The conservation agency also plans to perform medical check-ups to all the animals in Bandung Zoo after they ascertain the cause of the Elephant’s death, said Sylviana.

The Bandung Zoo stands on 14 hectares of land and has more than 930 animals from 200 habitats in its collection. The zoo is operated by private firm Marga Satwa Taman Sari, which was recently criticized by Bandung mayor Ridwan Kamil for its incompetent management.

R.I.P. Yani, yet ANOTHER victim of man’s exploitation of our beautiful creatures – WHEN WILL IT ALL END?!?