A tiny monkey is walking on stilts, clad in a red tracksuit and a ghostly doll mask, as cars and motorcycles drive past on a busy road in Surakarta, Indonesia. 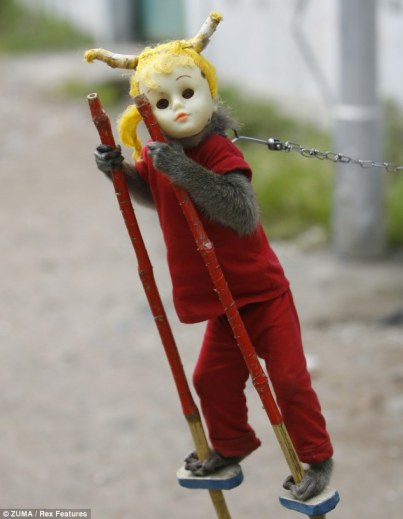 Neneng, a Long-Tailed Macaque, is only nine months old but can already put on a show as he plays a toy-guitar, walk on stilts and does a handstand in a red cowboy hat.

With a yank of the chain around his neck, his master Iyayi changes the act to entice those driving past to throw a coin or two at the performing primate, one of thousands on the streets of Indonesia

The practice of training Macaques to become street performers has been a part of the country’s culture for decades.

It has been growing in popularity since the 1980s when it changed from being part of ‘monkey circuses’ entertaining children in the poor neighbourhoods, to move to markets and road-sides.

The practice has become an industry in Indonesia, its centre in a district in East Jakarta known as as Kampung Monyet – Monkey Village – where a majority of the residents are ‘monkey masters’.

Here monkey masters train their carefully selected macaque for months to push trolleys, fetch money and roly-poly in the street for pennies.

The monkeys are often clothed and wear masks made out of the face of a dolls head.

Their cruel training methods include ‘the hanging monkey’ which is designed to wean the monkey off walking on all fours.

The monkey master chains the monkey to the ceiling and ties the monkey’s arms around its back, forcing it to stand on two legs.

This goes on for as long as it takes the monkey to find its balance on its hind legs, only allowing a daily food break before it is strung up again.

Neneng’s monkey master Iyayi bought him for 200,000 rupiah (£13) and spent then trained for three months to perform a variety of tricks.

The Jakarta Animal Aid Network (JAAN), a charity that feeds rescued performing monkeys, explains that the conditions in the slums is what keeps this practice going.

‘Poverty drives the handlers to exploit the monkeys in the hope of earning small change,’ the charity writes on its website.

‘From the forest they are captured and taken to ‘monkey village’, where the animals are trained to take part in street performances.’

Over the past months, JAAN have began rescuing dancing monkeys off the streets of Bandung as the BAN on dancing monkeys was finally put into place. They have rescued and are currently caring for over 20 monkeys and need your help! Last year they ran a successful ‘Sponsor A Monkey’ program for the monkeys that we rescued from the main Indonesian city, Jakarta. Since then, all monkeys rescued were released back into the wild.

They have now started in Bandung. Releasing all monkeys back to the wild is their main goal but the process is very long. As JAAN is an organization that runs solely on donations, they rely on sponsorship to keep our program running.

After many years of raising money for animal charities (£70,000 so far) I now find myself needing help for Gem, one of my beloved dogs.