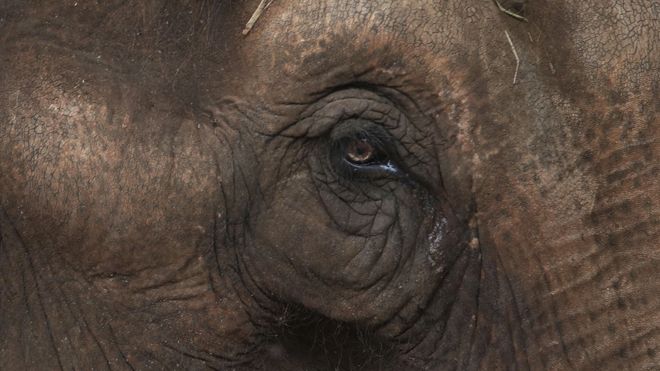 Maia, an Asian Elephant who spent most of her life as a circus performer, looks out from her new home at the first elephant sanctuary in Latin America in Chapada dos Guimaraes, Brazil on Oct. 12, 2016. Maia is one of two elephants who will get veterinary care as they live out their lives in forested areas, pasture lands with hills, large boulders, streams and springs in western Brazil.

They’ve spent much of their life performing in circuses, but now Asian Elephants ‘Maia’ and ‘Guida’ have finally been set free. Maia grunts and nervously moves her huge body back and forth while being released from a transport container to a new home. Here, there are no gawking crowds for the Asian Elephant that has spent her life in captivity. There are no blows from bull hooks, no one demanding tricks like people did when she was in the circus.

Instead, the first Elephant sanctuary in Latin America, on about 2,800 acres in the western Brazilian state of Mato Grosso, will allow Maia and Guida, another Asian Elephant that arrived this week, to simply roam. The two, along with possibly dozens more Elephants in the future, will get veterinary care as they live out their lives in forested areas, pasture lands with hills, large boulders, streams and springs.

“Societies around the world are starting to become more aware of the trauma we have caused these animals” in captivity, said Scott Blais, an American who drew on his experience co-founding a similar sanctuary in Tennessee in 1995 to help get this one off the ground. “We need to build solutions. It’s not enough to simply say they need a different life.”

For Blais and his wife, getting to this point was a long road. After years of planning, they moved to Brazil more than two years ago. Latin America’s most populous nation, with a land mass larger than the continental United States, was chosen for many reasons: the variety of real estate available, a team of like-minded people already in the country and an urgent need to take in Elephants from Brazil, Argentina, Chile and Venezuela. Sanctuary officials estimate there are more than 50 Elephants in South America that are similar to Maia and Guida: in the last phase of their lives and in need of a home as zoos consolidate and more jurisdictions, including many Brazilian states, prohibit the use of animals in circuses.

Maia and Guida, both over 40 and unable to perform, spent several years languishing on a farm about 800 miles away in the state of Minas Gerais. Not long after both had been released, Guida approached Maia and the two embraced with their trunks.

Blais, CEO of U.S.-based Global Sanctuary for Elephants, and local partners set out to create the sanctuary on a piece of donated land in the northern part of Mato Grosso, a state known for varied vegetation and a tropical climate that includes summer rains and dry winters. But the absence of deeds for all the land, a problem in rural areas of Brazil, made creating the sanctuary there impossible. So the search continued, finally ending with the purchase of land in the state’s southern part for roughly $1 million to be paid over five years.

As at other sanctuaries, cameras will allow people from children to scientists to observe the animals while letting them live in peace.

“These days, it’s absurd to have Elephants in captivity,” said Junia Machado, president of Brazil Elephant Sanctuary, a local group driving the project. “Having cameras makes it easier to get information about them. We hope this project inspires other sanctuaries.”

Figuring out what to do with aging Elephants has become increasingly difficult as their natural habitats come under attack on the two continents they come from. In Asia, the biggest threat is dwindling land. The animals are often illegally hunted for their ivory tusks in Africa, where a large-scale survey dubbed the Great Elephant Census found an alarming 30 percent drop in Elephant populations between 2007 and 2014.

Elephant experts say the animals would not survive if they were simply returned to the wild after living in captivity. The gap is slowly being filled by a handful of sanctuaries in countries like the United States, Thailand and Malaysia.

Living in a sanctuary can make a big difference for the highly intelligent animals that have a wide range of personalities.

Blais told of Sissy, an Elephant brought to the Tennessee sanctuary in 2000. Sissy had been labeled a killer after a zookeeper tending to her died from crushed ribs in 1997. She was also labeled as autistic and anti-social, and appeared so traumatized that caregivers were not sure she would last long. Sixteen years later, she still lives at the sanctuary, and is thriving.

“We saw that all the things she was labelled with were not her at all,” said Blais. “She evolved into one of the most sensitive, complex beings that I’ve ever witnessed.”

Please SHARE this article and feel free to leave a comment below. You can also sign up for UPDATES & NEW ARTICLES by submitting your email details in the right-hand column. Thank You

70-year-old Francis Romero was in a coma in hospital. His dog was allowed to stay with him, and did not leave him day or night. After a month Francis woke up from the coma with the words: