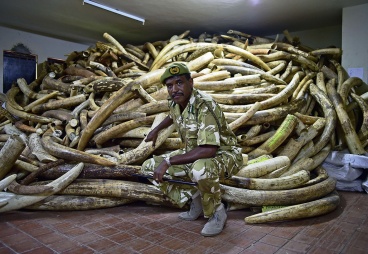 moving at least 105 tons of ivory and 1 ton of rhino horn in preparation for the torching of the items at the end of the month to discourage ivory and rhino horn trade believed to be fueling poaching of Elephants and Rhinos.

In a strong room behind two sets of heavy steel doors, workers pulled elephant tusks from piles that nearly reach the ceiling. Each one is carefully logged and matched against previous photos of the tusk, pulled up on a computer tablet. The workers carry the ivory outside with the numbers of tusks being counted at each stage by wildlife rangers. The tusks are then put into shipping containers and transported for storage, at the headquarters of the Kenya Wildlife Service (KWS) in Nairobi, Kenya, a process that is expected to go on for days. 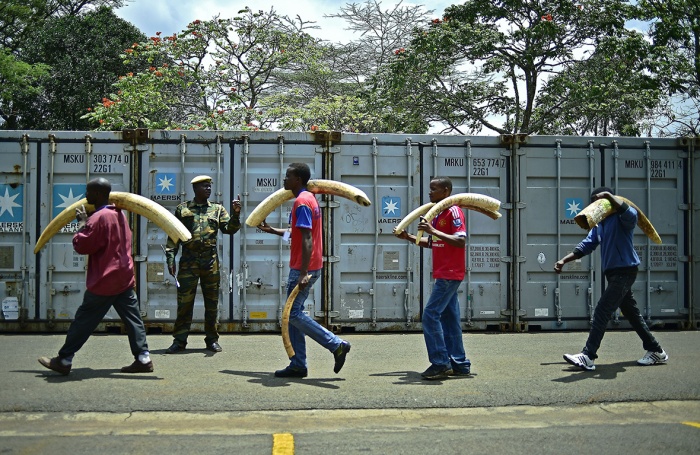 Kenya Wildlife Service Deputy Director Patrick Omondi said the stockpile is from Elephants and Rhinos killed in conflict with humans, from problem-animal control, those that died naturally or were killed by poachers.

The mass destruction is timed to coincide with an April 28-30 summit on protection of Elephants in Kenya.

A global ban on the ivory trade in 1989 briefly halted the Elephants’ demise. But the ban’s initial success was undermined by booming Asian economies and increasing demand for land. Africa had 1.3 million Elephants in the 1970s but has only 500,000 today.

The elephant populations in Tanzania, Gabon, Cameroon, Central African Republic, Mozambique, Republic of Congo and Congo are the worst hit by poaching, 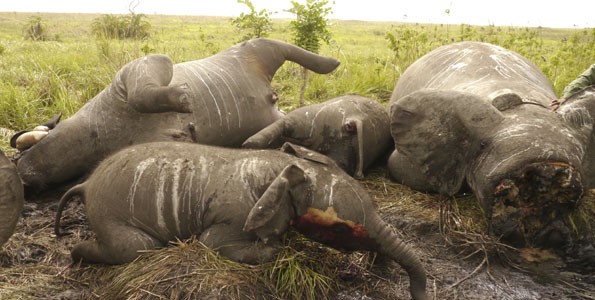 Save The Elephants said in 2014 that 100,000 Elephants were killed in Africa between 2010 and 2012. Last year, China imposed a one-year ban on ivory imports amid criticism that its citizens’ huge appetite for ivory threatens the existence of Africa’s Elephants.

Hundreds of people are expected to gather in London on Saturday April 30th to protest against the hunting of African lions as trophies.

This comes after the global outcry over the death of Cecil‚ one of Zimbabwe’s most celebrated Lions‚ who was killed in July last year by  American dentist Walter Palmer. Leading wildlife protection charities Lion Aid, the Born Free Foundation, IFAW, Four Paws, Save Me and One Protest, will come together in London on Saturday 30th April to call for an end to Lion trophy hunting in Africa and the import of Lion trophies into the UK and European Union.

The protest will see hundreds of people march from Cavendish Square to Downing Street to hear speeches from leading wildlife campaigners. Protesters will then deliver a memorandum to the Prime Minister David Cameron calling for the ending of all African Lion trophy imports to the United Kingdom.

African Sky‚ based in Pretoria‚ Gauteng offers any hunter a chance to hunt and bag a Lion trophy. The resort also offers the rest of Africa’s ‘Big Five’ game as hunting trophies.

Virginia McKenna OBE, who will be the opening speaker at the protest march outside Downing Street, said:

“The world has at last woken up to the tragedy facing Africa’s elephants and rhinos, but has been far too slow to realise the desperate plight of Africa’s Lions. In my lifetime, the number of African Lions has fallen from more than half a million to less than 20,000, and yet this iconic species continues to be hunted for trophies to put on walls or floors.”

“Fifty years on from the release of the film Born Free – which did so much to inspire people around the world to celebrate the beauty and wonder of Lions – time is running out for the species and they could become extinct in many parts of Africa within decades. If we are to protect their future, there can be no justification for the continued hunting of wild Lions,” she added.

Dr Pieter Kat, Co-Founder of Lion Aid, who will also be speaking at the march, explained, “There is little doubt that commercial trophy hunting started right here in Great Britain. Lured by the then massive game populations in eastern Africa, aristocrats and the rich travelled to places like Kenya to engage in what they called sportsmanship. Almost all the ‘big white hunters’ of the day were British – people like Frederic Selous, R.J Cunninghame, ‘Karamoja’ Bell and Denys Finch Hatton. American President Teddy Roosevelt travelled across eastern Africa on a ‘magnificent’ hunting trip, and many followed in his footsteps. Kenya banned trophy hunting in 1977, but the practice spread.”

“Trophy hunting is as morally, ethically and economically corrupt as the drug trade and people smuggling. It has no conservation benefit whatsoever, and a recent poll here in Britain showed 93 percent of the public opposed it. Trophy hunting started here and must now end here. High time that Britain joined countries like Australia and France to ban imports, and supported African nations like Kenya and Botswana which have banned the practice. Wildlife conservation needs to reject trophy hunting as a failed practice that belongs in the 1900s.”

In 1980, more than 75,000 wild Lions roamed the African continent, today it is estimated that less than 20,000 survive across just eight percent of their historic range. The African Lion faces a battle to survive on many fronts as a result of habitat loss, loss of natural prey largely due to poaching, and increased conflict with people and their livestock. In recent years, Lions are believed to have disappeared completely from as many 16 African countries.

Despite this ecological tragedy, hundreds of wild Lions continue to be killed by trophy hunters in Africa every year, with many of the heads and skins from these animals being imported to EU counties, including the UK.

You can register to join the March here

This is the letter that will be delivered to the UK Prime Minister at No 10 Downing Street at 3pm April 30th.

We the undersigned wish to highlight the plight of African Lions and the need for urgent and concerted action by the UK government to help prevent their continued disappearance across much of the African continent. Lions are an iconic symbol in many cultures across the world. Lion statues and images abound across London and Great Britain, and the door knocker at Number 10 is in the shape of a Lion. Africa without Lions is unimaginable, yet this appalling scenario is fast becoming a reality. From probably well over a million in the 1800s, and around half a million as recently as the 1940s, there may now be less than 20,000 wild Lions left in Africa. The situation is most desperate in West Africa where only some 400 individuals remain and where the species is considered to be critically endangered.

Lions now inhabit as little as eight percent of their historic range, and are believed to have disappeared completely from as many as 16 African countries in recent years.

The future survival of Lions now rests on just five populations that exceed the viable population threshold of more than 200 reproductive adults, some of which are in heavily managed fenced reserves which limits their long-term growth potential and therefore their ability to contribute to the continental recovery of the species.

The reasons for these devastating declines are complex. They include loss of habitat, loss of natural prey largely due to poaching, and increased conflict with people and their livestock.

Unsustainable and unethical trophy hunting practices are also having an impact; in the decade to 2013, almost 3,000 Lion ‘trophies’ were declared to have been exported to EU countries alone, almost half of which were derived from wild Lions. Trade in Lion parts and products, including skins and bones, represents an emerging additional threat; in the decade to 2012, nearly 30,000 Lion items were declared to have been legally exported from more than 50 countries.

In recognition of the increasingly desperate plight facing Lions, several countries have already taken action. Australia and France announced bans on the import of all Lion products, and the United States has recently listed Lions under its Endangered Species Act which will facilitate the release of funds from the US Fish and Wildlife Service to assist conservation measures as well as significantly restricting imports of Lion trophies and products.

We hereby call on the British Government to take strong and immediate action to join these nations in support of Lion conservation and to implement a complete ban on the import into the UK of any Lion product including sport hunting trophies. We call on the British Government to urgently support independent and scientifically verifiable population censuses to guide future Lion conservation needs in partnership with African range states. We further call on the British Government to declare its support for providing Lions with the highest level of protection against international trade by calling for Lions to be placed on Appendix I of the United Nations Convention on International Trade in Endangered Species (CITES) at its forthcoming meeting in South Africa later this year, and to persuade its European Union and African range State partners to do likewise.

Finally, we call on the British Government to take action through its Commonwealth partners, development programmes and international trade agreements to provide whatever scientific advice and resources are needed for African Lion range states to implement dedicated and effective conservation measures for this iconic species. We can no longer stand idly by and allow this magnificent animal to disappear on our watch.

There is a growing list of conservationists, celebrities and scientists who will add their names to this letter. LionAid will publish the distinguished list before the March. – See more at: http://www.lionaid.org/news/tag/ban-lion-trophy-hunting#sthash.IahDWzS8.dpuf 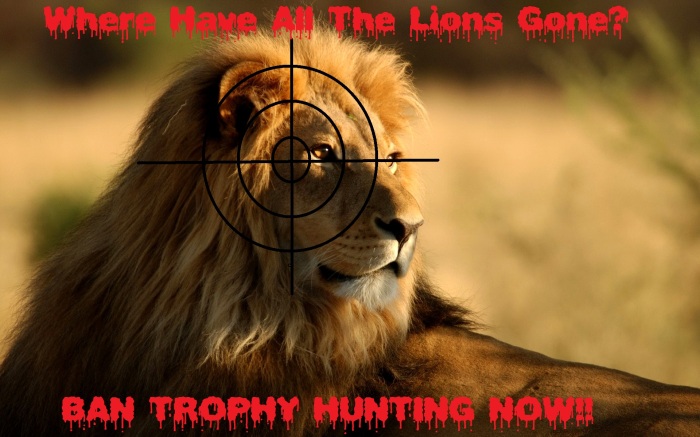 2 thoughts on “On Saturday 30th April, the fight against wildlife crime unites across 10,000 kms.”