Information obtained from a local animal rights organisation highlighted the Johor Zoo as the worst in Malaysia as the animals are kept in inadequate and poor conditions.

Throughout the world a zoo is a place of care and shelter for wild animals kept in captivity. It is a place where the public can learn to appreciate wildlife in safety, unfortunately the Johor Zoo is one filled with mistreated and near neglected animals.

“The zoo (Johor Bahru zoo) is the worst ever. They have yet to change the old cages and upgrade to better facilities for the animals,”

“After widespread bad publicity, Elephants and Orangutans were previously confiscated by Perhilitan, from this zoo.”

“The management are clearly incapable and uncaring,” said Sean Whyte from Nature Alert.

Angry at the level of animal mistreatment witnessed at the Johor Zoo, Sean hit out against the Malaysia Department of Wildlife and National Parks (Perhilitan) director general Rashid Shamsudin for neglecting the animal’s suffering.

“By permitting Johor Zoo to remain open, Rashid Samsudin is allowing those poor animals to suffer. This is an act of negligence. He should have resigned a long time ago,” he said.

Malaysian Friends of the Animal’s (MFOTA) spokesperson Hasrul Mohamed told FMT that wildlife cruelty can be witnessed throughout the zoo.

Hasrul expressed concerns regarding the cages and pens which he described as not being in compliance with the minimum standard specifications outlined in the Wildlife Conservation Act 2010. He was also not sure as to whether the zoo had a veterinarian on hand to treat and care for sick animals.

“Cruelty can be seen everywhere in the zoo. It is an open secret. We doubt if any of the cages meet the requirements stipulated under the Wildlife Act and we question as to how the zoo can still be allowed to operate when it is obviously breaking the law,”

“Do they hire any vets? It is a legal requirement under the new act, and if so, how has he or she allowed such brutality to continue,” Hasrul added. 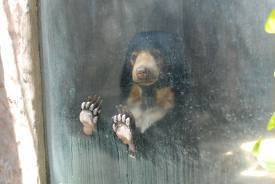 Hasrul then cited examples where Sun bears are made to live under extreme stressful conditions due to the deplorable and inhumane conditions of their cages.

“Nature Alert have filed a complaint to Perhilitan which was clearly ignored (and they act) as if nothing has happened.

“If you go to the zoo you can see how stressed out the Sun Bears are.”

“Tigers are kept in concrete cages. This is utterly unacceptable and barbaric. How can a tiger live in a concrete cage?”

He may be the king of the jungle, but based on a video taken at a zoo in Johor, the Lion below, looks less than majestic and more like a pauper.

His condition, however, has not escaped the concern of netizens, especially after a 30-second clip of the lion, which is believed to be sick, went viral on Twitter

“Zoo Johor authorities please do something. This lion looks weak and needs medical treatment,” tweeted one  who had earlier uploaded the video.

In the clip, the feline is seen barely able to stand on its own feet, with its mane, the foremost feature of a male lion, noticeably receding.

Hasrul questions why the Johor Zoo management has failed to impose strict rules and regulations to stop members of the public from feeding junk food and in some cases, cigarettes to the animals.

This practice by certain members of the public has been witnessed as a norm for many years without any stern action being taken against those guilty. 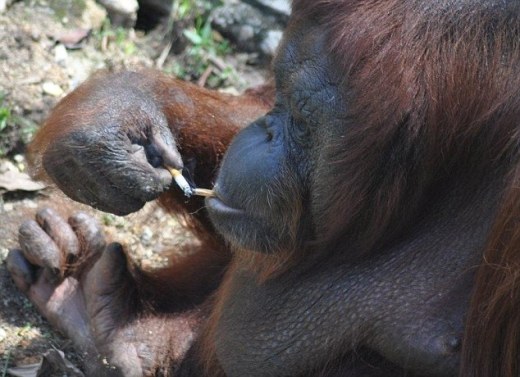 “MFOTA has recently exposed again, the continued feeding of Chimpanzees (with junk food), the public are able to throw junk food and lit cigarettes into the animal cages,”

“Why has Perhilitan not taken any action against the management? For years now, supervision is never ever present at this zoo,” he shrugged.

When contacted, Johor Zoo spokesperson Zakaria Razali refuted claims made by MFOTA and said that all the animals at the zoo, including the Sun Bears and Tigers are being treated well.

Zakaria told FMT that the Nature Alert spokesperson Sean Whyte was just “looking for an excuse to blame the management”.

“Nature Alert has a wrong idea of what is going on in the zoo. For him, every animal here is being abused, that is wrong and the truth is they are well-kept,” Zakaria said in a telephone conversation.

Zakaria explained that the animals are fed twice a day and said that the zoo “can’t stop visitors from giving junk food to the animals”.

When asked about the condition of the Sun Bears in their care, Zakaria again rebutted claims made by MFOTA and Nature Alert saying that the Sun Bears were not living under heavy stressful conditions.

He explained that all the Sun bears will be transferred into a new cage, soon.

“No, the Sun Bears are doing just fine. I don’t think they are distressed and moreover, we have built a new cage for them and soon they will be transferred into their new home,” he affirmed.

Pihak Zoo Johor please do something. This lion looks weak and need medical treatment.
Please RT to save this lion 🐾 pic.twitter.com/4r2WNRdIjB

Please help close down this hell-hole of a zoo by signing and sharing the petition NOW! You can also sign up for updates and news by email. Thank you.