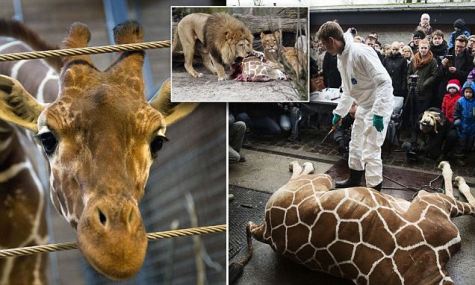 healthy two-year-old giraffe, was killed and fed to the lions in Copenhagen Zoo.

It caused an outcry at the time but, as a new Horizon documentary explains, it made perfect sense – and lifted the lid on something happening in zoos across the world, which they rarely admit to.

Every year, around 3,000 to 5,000 animals are culled in European zoos, and for logical reasons. If you encourage animals to breed in zoos, you can’t order a certain quantity and gender on demand. So you will inevitably end up with surpluses. If no other zoo wants them, it makes sense to feed them to their natural predators, however cute they look.

In Horizon, Liz Bonnin, the presenter of ITV’s Countrywise, who’s studied and worked in zoos, watches a sable antelope being fed to the lions at Copenhagen Zoo. From here she lays out the arguments for and against culling, taking a calm and objective approach to the whole, vexed subject of zoos and animal welfare.

Culling made sense in that particular instance. But do zoos themselves make sense any more?

“Zoos have had an important role for many years, breeding animals,” Bonnin tells me, “but, actually, 90 per cent of the animals in zoos aren’t endangered.”

With mounting evidence about bad animal welfare, is it justified to keep them in zoos, if they’re not saving enough endangered species? Recent research shows that elephants in zoos only live to around 19 years old, less than half the average 40-year lifespan of those in the wild. Elephants develop arthritis and chronic foot problems by not walking enough in zoos, and not walking on the right material. Throw in the drastically different weather conditions of a zoo to the elephants’ native climate, and you begin to appreciate what a rough deal they get.

“Wide-ranging, big animals – like elephants, polar bears, big cats and apes – don’t do well in zoos,” says Bonnin. “But these are the charismatic animals that people expect to see at the zoo. Still, people don’t want to see them unhappy, pacing up and down.

“Zoos can improve the situation, and educate the public at the same time, by concentrating on species that can thrive in a zoo. A responsible zoo can inspire the public with spiders.”

work as the last-chance saloon for near-extinct animals, either. In a moving moment, Bonnin visits one of the last five northern white rhinoceroses in the world, in a Czech zoo. The northern white rhino is extinct in the wild – so zoos were the only hope for their survival.

For 40 years, zoos have done their best to save them but, since 1975, only four northern white rhino calves have been born in captivity. The remaining females today are unable to breed – their only hope of survival lies with genetic breeding in a lab, from stem cells.

Despite immense efforts, zoos have failed with charismatic, popular animals, such as the northern white rhino. What chance do less charismatic, endangered species stand?

Bonnin is careful not to condemn zoos outright. Nor does she come up with one magic answer to the question of what you do with zoos in the future. But there is a silver lining.

“In 2004, Detroit Zoo sent its elephants away to a sanctuary, on animal welfare grounds,” says Bonnin. “People said visitor numbers would go down. They went up by half a million.”

This article was first published by The Telegraph on 17 Apr 2016.

2 thoughts on “POLL: Is It Time To Close Our Zoos?”