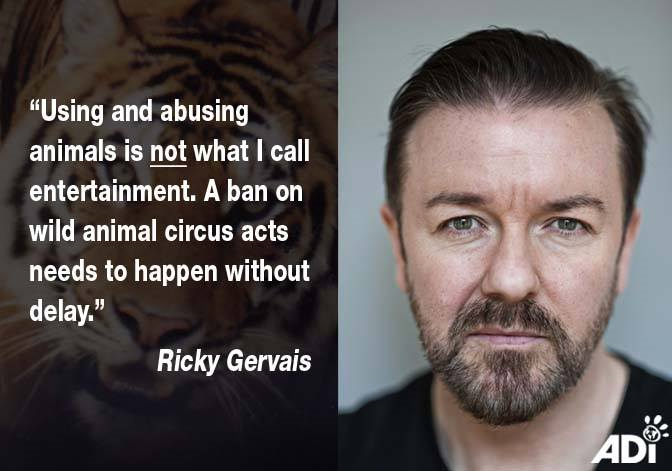 Comedian Ricky Gervais has always been an outspoken animal advocate who has shown great support for a number of animal rights issues. Using his massive following on Twitter and Facebook he has raised much-needed awareness to pressing for bans on animal testing, fur farms, and trophy hunting, and the promotion of pet adoptions. He even donated profits from a comedy tour to animal welfare causes.

And now he is his showing continued support for a ban on wild animal circus acts! In a Facebook post shared by Animal Defenders International (ADI),

Ricky said “Please support ADI and help secure a UK-wide ban, ending this madness once and for all.”

This vocal support comes after a bill to end wild animal circus acts in England was blocked by a single vote (AGAIN) on March 16th. This bill will be brought forward again on April 27th.

This is not the first time Ricky has spoken out about the use of wild animals being used in circuses. In 2017 he said “I am appalled that wild animals are still kept in circuses and fully support the call for a ban. It is high time that the Government got on and implemented one.”

In 2017 MPs ran out of time to discuss the bill during the session in which it was scheduled for debate, and it could only have progressed to the next stage if no one objected – which Conservative MP Christopher Chope did. Discussion of the bill, which has widespread public and political backing, has now been pushed back.

Chope and fellow Tory MPs Andrew Rosindell and Philip Davies have blocked several similar bills in the past, even though their objections fly in the face of overwhelming public support for a ban. A government-commissioned consultation found that 94.5 per cent of respondents are in favour of outlawing this cruel and archaic form of entertainment.

Animals don’t want to ride bicycles, stand on their heads, balance on balls, or jump through rings of fire. Lions, tigers, and other wild animals used in circuses perform such tricks because they’re forced to. They spend most of their lives being carted from one performance to another in “beast wagons” or barren temporary enclosures and may be beaten or punished as part of circuses’ barbaric training methods.

Circuses are notorious for their exploitation and abuse of animals, forcing them to perform unnatural tricks under threat of whips and bull-hooks. When not performing, animals are stuck in cages, traveling from town to town with their health and well-being neglected. The single best way for you to personally combat animal cruelty at circuses is by never buying a ticket to these shows. And remember to explain to your friends and family why visiting circuses supports animal abuse!

To see how YOU can help, please visit http://www.stopcircussuffering.com/news/4796/

Please SHARE this article to raise much-needed awareness to this issue. You can also SUBSCRIBE to receive news and updates direct to your inbox.