Lions and Tigers from Port Elizabeth’s Seaview Predator Park are being sold to game farms known for hunting and the exporting of animal bones.

And one of the farms has been linked to Laos-based Xaysavang Network, which has been described “as one of the most prolific international wildlife trafficking syndicates in operation”.

Although the park has refused to comment, Eastern Cape department of economic development, environmental affairs and tourism MEC Sakhumzi Somyo has confirmed that:

Somyo responded to questions by the DA’s chief whip in Bhisho, Bobby Stevenson, regarding the transportation of Lions and Tigers in and around South Africa.

The revelations come after the Nelson Mandela Bay Municipality refused to give Seaview Predator Park an annual rates rebate earlier this year, saying it could not be sure the park was not participating in “canned hunting”.

Earlier this year, the Weekend Post revealed television show hosts, major league sports stars, wealthy entrepreneurs and a former US Congressman were among those who had hunted at the family-run Tam Safaris.

Departmental permits indicate there have been 86 Lion hunts at the reserve over the past six years.

“I have an agreement with them but can assure you that none of these Lions from Seaview are used for hunting.

”They are specifically used to breed and bring new blood into our breeding projects,” he said.

“Those Lions are then either sold or used for hunting.

“I must stress again that all our hunts are legal and completely by the book.”

The network has also been described as “one of the most prolific international wildlife trafficking syndicates in operation” by US Secretary of State John Kerry.

“It has nothing to do with you. Ask them [Seaview] if you want to know why.”

Several requests for a meeting with Seaview Predator Park were turned down but park owner Janice Gibbs said in an e-mail: “I trust you enjoyed your visit to the Park yesterday. We do not wish to comment to the media who publish untruths and are very biased.” 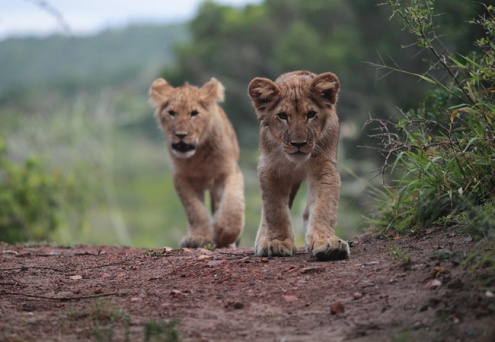 The department’s findings come as no surprise to Chris Mercer of the Campaign Against Canned Hunting, who said the Lion trade was fuelled by parks that disguised “Lion breeding factories” as petting zoos and wildlife sanctuaries.

“We have proved that the entire industry is corrupt, full of liars and just toxic. This now proves the known link between bone exporters, canned hunters and the petting industry.

“The bottom line is that these breeders are outsourcing their Lions to petting zoos to generate money and when the Lions are big enough they get exchanged with cubs and sent to hunting farms,” Mercer said.

“This proves that cub petting parks sell their Lions for canned hunting and are fuelling the market. They constantly hide behind smoke screens but we all know that cub petting is feeding the canned industry.

“What else happens to the Lions? They [Predator Parks] are breeding factories who pose as conservationists but are really feeding the Lion bone and canned industry.”