Ricky Gervais has carved an incredibly successful career from making people laugh but it’s no joking matter when it comes to standing up for the rights of animals!

In 2014, Ricky famously declared; “Animals don’t have a voice. But I do. A loud one. I’m a fucking big mouth. My voice is for them. And I’ll never shut up while they suffer”. And true to his word, Ricky is constantly shouting from the rooftops about bringing an end to animal cruelty. Whether it’s fighting against Fox hunting or battling a historic Bull fight when it comes to all creatures great and small, Ricky has their back.

Thanks to his celebrity status from films and TV, Ricky has a staggering following on Twitter and Facebook and he regularly uses social media to make people sit up and listen. One carefully worded tweet to his millions of followers can bring global attention to animals in fear or danger within seconds. He can encourage charity donations to come flooding in and get everyone talking about shocking examples of cruelty around the world.

In the past, Ricky has used social media to highlight the atrocity of 10,000 dogs slaughtered every year at the annual Chinese Yulin Dog Meat Festival and campaigned to bring it to an end.

He has individually named and shamed ‘big game hunters’ as they’ve posed by their bleeding ‘trophies’. Ricky also posted this message on his Facebook page – “I’m sick of Trophy Hunters trying to excuse their grim sport by saying they provide a service. They exploit the needs of the poor. They pay lots of money to go and shoot a magnificent animal because the authorities need the cash, and then claim they are doing a good deed. It’s not a good deed. Those authorities would rather have the money AND the animal still alive but they can’t afford to. So they’re forced to take money from rich psychopaths who get their cheap fucking thrills from shooting a giraffe or elephant in the head. If they were providing a service THEY would be the ones being paid. Imagine a vet paying you to put down your dog and then taking a selfie next to the corpse. And as for “the money goes to saving there remaining animals”. Oh dear. Where will it end? Can you pay more to kill the Leopard with a hammer if that’s your perversion? They’re already killing with bows and arrows for fucks sake. And would we allow some billionaire sicko to shoot one cancer patient if he gave a million dollars to cancer research? No. Of course we fucking wouldn’t. If they really wanted to do a good deed they would donate the money, and NOT shoot the animal. They would be heroes then. As opposed to murdering scum”.

Why Ricky Gervais Is Every Cowardly Trophy Hunter’s Worst Nightmare!

In 2014, Ricky lent his considerable Twitter celebrity to the campaign against Western Australia’s controversial Shark kill policy. He appeared on social media holding up a sign decrying the WA government plans to catch and kill any shark 3m or over that comes within 1km of a Perth beach. It read: “To the government of Western Australia – Listen to Facts, Listen to Science, Listen to Reason – Stop the Shark Cull.” He also used his appearance at the British National Television Awards.

A local street artist made his own protest by painting a mural on a building which included the anti-cull quote by from Ricky. The cull was later called off!

Also in 2014, Ricky symbolically adopted one of the 130 moon Bears on a Bear bile farm in Nanning, China, a farm that’s set to transition into Animals Asia’s third moon Bear sanctuary. Ricky named the young male Bear, Derek, after his comedy-drama.

Derek is a ten-year-old Bear with a host of problems, as a result of a life trapped in a cage where workers would extract his bile. His head is raw from years of rubbing his head against the bars of his small cage, and most of his teeth have fallen out, with the exception of a few rotten teeth which badly needed to be extracted. His lolloping tongue is a result of a nerve damage, while his right eye suffers from a cataract. 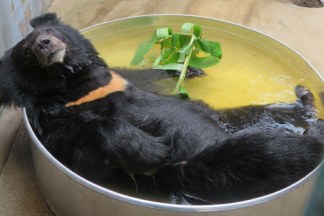 “Derek is a beautiful but very damaged Bear,” said Ricky. “After such a sad and traumatic existence on a Bear farm I am thrilled to have adopted him as one of 130 Bears currently being rescued by Animals Asia in China and long to see him enjoying his new life in the sun! I so admire this historic initiative to turn a Bear farm into a sanctuary and applaud the efforts of everyone involved.”

In the USA in 2015, a female black bear called Ricky who spent 18 years in a cage was freed after a settlement in a lawsuit brought by the Animal Legal Defense Fund

The lawsuit was filed by in December 2014 on behalf of concerned Pennsylvania residents against Jim Mack’s Ice Cream, where Ricky had lived in a small, concrete cage, eating a mix of corn and dog food funnelled onto the floor of her enclosure.

Again in 2015, Ricky helped hundreds of shelter dogs desperately lacking food and medical care. When an influx of 680 dogs arrived at a public shelter in Odai, Romania, the workers knew these dogs didn’t have anywhere else to turn. Despite not having enough food, bedding or even bowls for water, the shelter took them in. They needed help and fast, so London-based partner rescue, K-9 Angels created a fundraising page with an urgent plea for donations “to ease the emergency situation at the shelter.” Over the course of several days, the group had raised only about £4,000 for the Romanian shelter. The money was enough to make sure the dogs had enough food for about two months, but it didn’t come anywhere near what the shelter needed to pay for basic supplies, vaccinations and labour costs. In fact, it was about £26,000 short. That’s when Ricky stepped in and posted the following tweet.

“Within days we had raised £20,000. Before Ricky retweeted we had only raised £4,000 so it just goes to show the power that animal loving celebs have. We are very grateful,” K-9 Angels founder Victoria Eisermann. The group showed their gratitude with a post in which they called the comedian “an angel” for sharing their fundraiser page. Eisermann added that the group even honoured Ricky by naming one of the young puppies “Ricky.”

Lately,  Ricky has been very vocal about Lucy’s Law, the campaign to end the heart-breaking puppy farming trade. Lucy’s Law is named after a remarkable Cavalier Spaniel called Lucy who was rescued from a Welsh puppy farm and became a celebrity in her own right on social media before her death more than a year ago. Ricky regularly posted details on Twitter and Facebook leading to it being a short distance from becoming law.

Ricky’s passion and ability to be vocal has made millions of people painfully aware of such issues as the slaughter of whales in the Faroe Islands and the stolen pet dogs of Thailand that are destined for the illegal meat trade.

Ricky also reminds us all of the huge number of animals in rescue shelters and the importance of the hashtag #AdoptDontShop with his numerous posts. 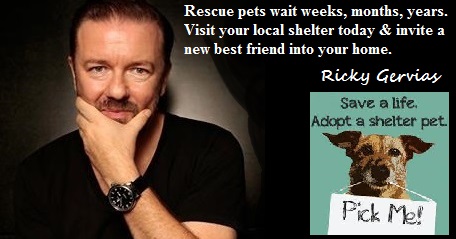 Ricky is driven to raise awareness and get signatures on petitions that pile pressure on governments. He has put his name to campaigns with charities such as PETA and the Humane Society International. Ricky won’t stop until animals are protected from blood sports, their fur is no longer used as a fashion statement, the Yulin ‘festival’ ends and the last SeaWorld ‘fish tank’ is empty (etc etc!)

Ricky is undoubtedly a voice for all animals and it’s fair to say the world is listens to him.

And a final quote from Ricky……

This is only a small part of what Ricky has done for animals over the years.

…….and THAT is why Ricky Gervais is a Green Monster!!

4 thoughts on “Why Ricky Gervais Is A Green Monster?”

A special thank you to @woof_n_walk_ from lovely Lara for her sponsorship which will go towards her hydrotherapy costs.