An article by Will Travers OBE, President of the Born Free Foundation

Will Harambe’s Death Be The Tipping Point?

Yes, it is a tragedy. One of just 765 Western Lowland Gorillas in zoos worldwide has been needlessly killed.

I say needlessly because although, perhaps, the zoo authorities were faced with few options when confronted by the possibility of a child dying in the Gorilla enclosure, the child should never have been there in the first place and, some would argue, neither should the Gorilla.

Wise after the event, it is always possible to speculate as to whether the Gorilla could have been lured away, as was successfully done in April 2014 when seven chimps escaped from their enclosure at the Kansas City Zoo and keepers using “treats” enticed the animals back. No-one was hurt. One could say that the Gorilla could have been tranquilised. Maybe yes, maybe no. It is impossible to predict exactly what would have happened once the dart struck home. Would it have enraged a powerful 400-pound animal with fatal consequences? Or would the Gorilla have accidentally collapsed on and injured or drowned the child as the drug took effect? Who knows.

But some things seem clear: The whole basis on which zoos are founded, the placing of human visitors in unrealistically close proximity to potentially dangerous animals relies on there being an assumption on the part of the visitors that it is a safe thing to do. Otherwise all parents would be issued with harnesses to restrict and control their children throughout the visit. Some people suggest that the fault lies with the parents – maybe so, in part. Others say the zoo did not adequately ensure that barriers, specifically designed to keep wild animals in and human beings out, were not fit for purpose.

Now, predictably, there will be reviews of safety procedures and, doubtless, there will be petitions calling for the parents/the zoo/the licensing agency/the American Zoo Association/the City authorities to be held to account, and who am I to say those are not without justification.

However, there is a wider issue that needs debating here. Gorillas, like many other species are under enormous pressure in the wild. There are approximately 175,000 Western Lowland Gorillas left. There may be fewer than 4,000 Eastern Lowland Gorillas clinging to survival in war-torn eastern DRC and there are nearly 1,000 Mountain Gorillas making a modest come-back from the brink of extinction (none in zoos). Surely captive breeding in the safe and secure (and mind-numbingly unnatural) captive facilities offered by the world’s zoos is the conservation safety net these species need. Surely after spending hundreds of millions of dollars (Cincinnati Zoo’s plans for a new Gorilla enclosure announced in September last year, will cost at least US$12 million) zoos are making a significant contribution to the survival of the species not least through captive breeding programmes that lead to the re-introduction of Gorilla families to the wild.

The number of Western Lowland Gorillas that have ever been returned to the wild in recent memory numbers approximately 50, almost exclusively from the zoo collections run by Damian Aspinall in Kent, England.

So, are zoos delivering a conservation dividend? Are they providing the kind of educational resources that will inspire the naturalists of the future? Are they a realistic hedge against extinction for more than a handful of iconic species, largely selected on the basis of the oooh and aaaah factor?

The answer is emphatically no!

The global zoo industry, of which Cincinnati and others are leading members, consumes billions of dollars every year while the conservation movement is crying out for a fraction of that kind of funding to address the habitat and species crisis that now confronts tens of thousands of species. The very fact that in interviews following the Cincinnati incident, the Gorillas has been described as being ‘not blood thirsty’ indicates a Victorian misunderstanding of the true nature of Gorillas, despite the work of Dian Fossey, Sir David Attenborough, Ian Redmond and others who have painstakingly tried to address the stereotypic image of Gorillas as some kind of half-human monster and the personification of King Kong.

The fundamental question is: are zoos fit for purpose or are they past their sell-by date? I conclude that they are out of time but then that is just my opinion. Quite reasonably, you may ask, will things ever change? Born Free Foundation and I have been constant and consistent critics of zoos for over 30 years. We have been called a “nine-day wonder”. We have been described as a broken record, repeating the same message but I believe that history will prove us to be right. And change can happen if we, the people, want it badly enough.

Five years ago, the captive marine mammal display industry, as represented in many people’s minds by SeaWorld, seemed invincible. Today, following the making of one film, Blackfish, SeaWorld has changed beyond all recognition. No more performances with trainers in the pool; a share price in free-fall; attendance down; profits down; a new CEO fighting to restore some semblance of respectability and now, in partnership with The Humane Society of the USA, SeaWorld has made an announcement of such profundity that many of us never thought we would hear it in our lifetime: That the current killer whales they hold will be the last. There will be no more breeding. There will be no more imports from other facilities. There will be no more Orca in captivity.

Is it too great a leap of faith to imagine that, just as the death of Cecil galvanised the world to reconsider the justification and morality of trophy hunting, so the death of Harambe will cause a seismic readjustment of public attitudes to the lifetime incarceration of millions of animals for little more than costly and, indeed, wasteful public entertainment, a form of exploitation that risks the welfare of the animals concerned and the safety of visitors?

Harambe’s death is not an isolated incident. According to Born Free USA, since 1990, 15 zoo incidents have resulted in loss of human life and at least 110 injuries. Keepers have died, members of the public have died, numerous animals have escaped and, time after time, customers have gained access to supposedly enclosures where they have suffered injury.

A serious debate about our relationship with wild animals and the natural world is long-overdue. It is predicated on our common desire to protect and conserve life on Earth and to motivate and inspire human kind. As part of that debate we must determine whether the zoo experiment, the public display of exotic animals to an increasingly urbanised human society, has any further role to play or whether, in a world that by the end of this century will be jammed-packed with 11 billion human beings, we can make space for wildlife in the wild.

From an article by Will Travers OBE, President of the Born Free Foundation. 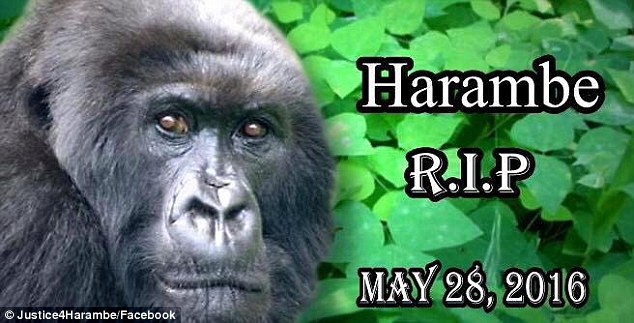 We can ALL do something REALLY positive by NOT visiting any so-called ‘attraction’ that abuses or exploits animal wherever it may be in the world. Please share to raise awareness. To receives updates and news by email please add your details in the right-hand column. Let’s ALL make animal abuse HISTORY. Thank You

One thought on “Will Harambe’s Death Be The Tipping Point?”